What’s your story?- Something happened
Parakalo- Welcome to Crete 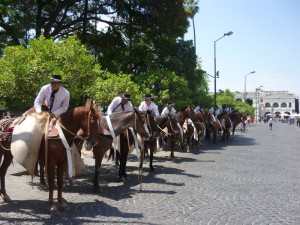 It’s six in the morning when we step foot on a desert street of Salta.
The town is incredibly calm and quiet, as calm as the weather gets before a storm. We walk up the street as the sun rises, passing by parks where the first birds are waking up.
The town, bathed in a semi gloom, looks like a town taken from the past. Sun rays are slowly unveiling the colours of the colonial houses as we make our way downtown, our steps echo in the empty streets. Without noticing, we are slowing down the pace, wondering what the town looks like when it’s awake.

Now sipping a freshly-made orange juice in a cafe, I observe life in town. People rest in parks; church bells ring to announce the end of the morning mass. I could easily imagine, from the sunny terrace, the ballet of dresses sweeping the paved streets, the giggles of young women being courted. A group of older men walking across the park to the gentlemen’s club, leaving puffs of cigar smoke behind them.

Suddenly, a trumpet scares the ghosts away and I am back from my daydream, back to the sunny terrace.

But the colonial times aren’t over, even in 2011. The trumpet is the call of the guard, who is forming straight lines of horses in an orchestrated march.
We didn’t really know what we were watching, but we stayed there for the whole hour it lasted, silencing when the trumpets did, commenting when the horses started their march again. It probably was just a simple change of guard, but on that morning, so early in a colonial town, we felt like we were somewhere in back time.

As dawn gave way to the morning sun, Salta became the capital city of the province. People hurried down the streets, entering shops, getting out with full bags. The whole city was awake; the streets were busy with people and cars, the parks crowded with happy children.
Like in any other city, we tried restaurants, sat on terraces, visited churches and hiked the pilgrim’s hill. Like in any other place, we talked to people, mostly visitors, wandered in the streets and took photos. Salta the capital became that: just another city.

But when the sun rises or sets, during the short moments they last, that’s when you know why you came to Salta. Not for the restaurants, nor the monuments, not for the hill. You are there to get that indescribable feeling of being in a movie, of being somewhere back in time. You went to Salta to wander down the peaceful streets. Or to look at the houses and the buildings under the first or the last rays of the Sun, thinking of the history Salta has. Thinking that you are in the North of Argentina, where you probably never thought you would be. It’s just a small dot on a world map, you’re just a person in your time, standing where other persons have stood a long time ago, dressed differently, in Salta.

Tags: Argentina, Salta, travel, why you go to