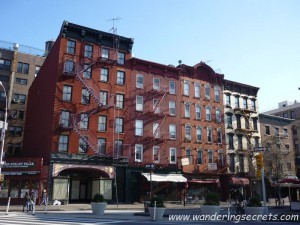 When I was a little girl I used to dream about spending the night  in a supermarket. I used to imagine ways of hiding before closing time, and ways of getting out unseen at opening time. Then, of course, my favourite part was to picture me wandering around the supermarket and trying all kinds of food…

But I’d never have thought it would happen for real.

After having crossed Canada with 30$a day (including accommodation and transport), freezing to death in Edmonton and the worst experience of WWOOFING in Victoria, we decided to go spend Christmas in New-York. Classy.

So we flew, found a hostel, walked around the city with a bright sunshine, ate hot dogs and even saw the Statue from very far.

On Christmas Eve, we decided to go for a drink. We did, twice. After what, we started to feel the effects of alcohol (first drink in months…) and realized that there was something that we still hadn’t tried: eating cheesecake.

Off we went, in our quest for cheesecake around a quiet New York city at night . Of course, at 9 pm on Christmas Eve nothing was open but for the sake of the stereotype, we wouldn’t let go. And also, we were starving.

Until we saw that small supermarket that seemed to sell cakes and that was still open. Guillaume rushed in and for some reason I waited outside.

Looking through the window I could see him hurrying around to find something to eat  and I saw at the same time two men walking out of the supermarket and… yeah, closing it down. With Guillaume inside. Who was still looking for that cake.

By the time I realized they had closed the shop, the two men walked away.

And yes, I ran after them, they opened the entrance again, we laughed, and they didn’t.

Guillaume still wanted to buy something although it was clearly too much to ask, but when you are faced to a hungry bear I guess you don’t argue.

And we went home, with a cheesecake.

Walk to the Statue of Liberty