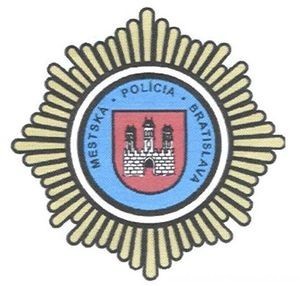 There’s this noticeable, strange and irrational fear for the police in France. Drivers getting nervous when they see a blue car, people twiking, behaving just a little bit out of normal when they come across the police. I haven’t seen this behaviour in any other country so far, and I can’t explain it to my students when they ask me how people coming from a “revolutionary” country like France, can be scared of the police.

So there was this air of panic, in the car, when my friend and I were trying to figure out how to get to the road and drive off to Bojnice and two policemen stopped their car next to us. We were in a parking lot doing nothing wrong. And somehow Guillaume, whom we were on the phone with, and my friend got a bit nervous when the white car stopped.

Also, we were trying to figure out how to take the one-way street the wrong way. Otherwise we had to go up a bridge, cross the river (going the opposite direction Bojnice was), take the first exit and drive back to basically where we were. In short, doing the right thing would take us 20 minutes to get to the highway, and taking the one-way street would take us a minute.

I’m not good at maths but it seemed like an easy calculation.

But there was that police car. And they had seen us. And everyone in my car was getting nervous although we weren’t doing anything wrong -yet- and we were parked in a parking lot.

One policeman came out and slowly (really slowly) came towards the car.

I can’t blame him, for from the outside, we were staring at them since they’d parked their car, mumbling on the phone and passing it to each other while the policeman was approaching us.

He tapped on the window.

I really didn’t know what to say. I opened the window, smiled at him, talked in English and showed him what the GPS wanted us to do.

He asked me where we were heading, looked at the map, then for a minute he gave us directions (take the bridge…) and realized it would take forever to get to the highway that was at the end of our one-way street.

“Follow the car” he said, and slowly (very slowly) walked back to his car.

We followed them down the one-way street up until the crossroads and the highway. Then he came out of the car, told us to take the first right and follow “Nitra” signs until Bojnice.

“That guy was handsome” one of us said.

Some of us were still shaken… hence the blurr