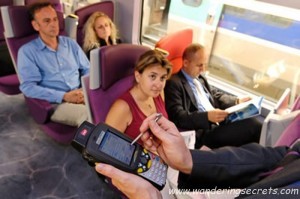 After posting this note on personal anecdotes and stories, I decided to share some of mine with you. Just to give the blog a more personal and human touch. I hope you appreciate them and you eventually share your anecdotes with us.

On a regional train, somewhere around Lyon, on a sunny day.

I ran on the platform, got in and went straight to the inspector (yes it happens sometimes) to tell him that I needed to buy a ticket. In a very French way (grumpy serious face) the man tells me to sit somewhere and wait for him. When he comes, 15 minutes later, he tells me he is going to charge me 20 euros more, to which I agree with a polite smile, then he says I can’t use the reduction card to which I reply that I know.

The inspector looked at me and said : “You know, I’m going to let you travel for free. You’re a nice person and it’s not something I see everyday”.

I don’t know if he was having a bad day, if generally he had to argue with people, if some persons were agressive or what, but when he said this to me I felt…sorry. Sorry that all he needed was a smile, and that so few people, in the thousands of people he sees everyday, give it to him. And of course, I was also very happy that I didn’t pay  30 euros for a 20 minute train ride.

Where it all happened (photo is not mine)

In France, if you buy your ticket on board, it costs you from 10 to 20 euros more than the normal price. And you can’t use your reduction card.

Which means, with a train leaving every hour, that a large majority of people who are late to take their train run in and hope the inspector doesn’t pass by. If anyone British is reading this I’m sorry to say that’s the way it works in France. It’s common (not to say normal) not to pay for transports and to cheat when taking exams. It’s also normal, in big cities, to yell at someone to get what you want. It’s rude, it’s agressive but I think culturally  it’s also what people expect form you. I never reply back, I don’t make scenes, and I never get away with it. The others do. It’s like they’re telling me “you could at least try” when I don’t pretend to look for my bus ticket when I know I haven’t bought one.

One thought on “What’s your story? The tired inspector”