8 mistakes I did when I had post-trip depression
What’s your story? We got off the plane 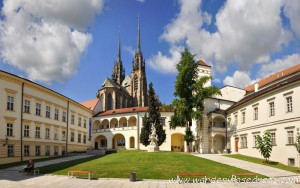 Wandering around the streets of lovely Brno under the heat of the sun, we were looking for something to do indoors. It was either hiding from the sun, or complying to my friends’ request to rent a SEGWAY. Yakes, a segway.

I hate those things.

That’s how we’ll all end up like those fat humans in Wall-E.

And we can’t stop for a beer with a stupid segway. Unless you agree to pay more than 30 euros, which is out of the question not only because I travel on a budget, but because of my principles (and yes, I do have some).

So there we were, frantically searching the guidebook for something to do by foot and inside. We had the choice between the underground galleries or the Capucin monastery.

Go figure why we chose the monastery. Maybe the guidebook did a fair job recommending it, maybe some of the group thought it would be a quick visit, and some others didn’t want to walk anymore. Who knows.

So we all agreed on going to the Capucin monastery. It wasn’t hard to find, signs were everywhere in the old town, pointing at the monument (depending on what kind of traveler you are, this could be a good or a very bad sign). Who knew why that monastery was so famous in a town like Brno. In Central Europe. In a town close to Vienna, Bratislava and Prague when  all three would drive you crazy if you tried to count the number of churches there are (I’ve never seen so much church density, that being said.).

The monastery was closed but the vault was still open, the lady said.

A vault? In the middle of the summer? With friends?

I don’t know what’s going on with humanity lately but violence, sex and death seem to attract more people than ever. Some of us had glowing, sparkling eyes with the idea of seeing mummies. To be honest, I kind of wanted to see one, and learn about their making.

So we went in.

In a cript, on a hot and sunny day of July. After two beers.

The effect of alcohol wore off after the first room. I mean, the first room was just an amuse bouche compared to what was next. A saint and a lady (all dressed up) lying down in a glass coffin. It was actually nice to see how well the clothes and ornments were kept through time.

As we kept on going, we saw more and more of these coffins, less and less clothes and a lot of bones. Incredibly well kept skeletons lying from one end of the room to another. Teeth. Nails. Skulls.

It was a bit of a surprise because I really was expecting mummies, but oh well, I’ll wait to be in Egypt for that.

Entire families of dead people were lying there. Not much was said about how the monks did to preserve the bones so well, but the result was amazing.

It is a bit creepy to observe a whole range of skeletons, isn’t it? To try and see if that little girl over there still has teeth, or if the husband’s head had any missing parts. Or anything that would get you looking closely at a super dead body.

We kept on walking through the rooms, growing a bit tired of all these bones lying around. By that time, I had digested my beers, and the fun was starting to dissipate. It would have been fun enough with a room or two and I wanted to go outside and enjoy life (who wouldn’t?)

And just when I thought all the fun had vanished, I steped onto the last room.

I was walking fast, wanting to end the visit (my pacience in museums and places like this has very short limits). So I walked in, rushed through, turned my head right and oh!

But this one was a bit scarier than the others. It was lying down directly on the ground, alone, in a cage. Super creepy.

I couldn’t help but to watch it, somehow mesmerized. I guess the glass coffins put a boundary and kind of kill off the idea of reality. But this one, lying down, I could touch it. I never would, no. But I could. And it was sad to see it all alone in that jail.

After a few  minutes of contemplation I turned around to exit the vault and… oh!

I have no words to express how I felt when I saw a hundred skeletons lying on the ground, in a common cell. I don’t know if I felt scared, disgusted, suprised, a mix of everything or else, but I know I spent a whole 10 minutes watchin the dead hundred there. Watching some of the clothes they wore (understand: limbs of textile that used to be trousers), the ornaments (they were monks) and all the detail we could see.

It was like meeting the dead, and I still can’t describe that feeling. Disturbing, fascinating.

It might surprise you, but I loved the visit. I loved how well the vault was made, the displays (going from “soft” deads to hardcore deads), even though I wish we could know more about these monks, that seemed to have excelled in the art of preserving the human body. The visit was not too long (rather short I would say) but it’s plenty of dead people to quench your thirst. And you’ll leave the place with a new feeling:


to live your life to the fullest

As the monk said: “We were the same as you are here now, you will turn into the same form as we are now.”

Photos are forbidden, so this was taken from Trip Advisor

Have you ever visited a creepy place? or Brno? How and what was it?

Next for our fellow travelers: What’s your story? Hugging people I don’t know