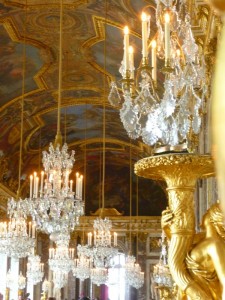 “This is Versailles, Madame” was told Marie-Antoinette when she questionned the etiquette applied during her reign.
When Louis XIV (aka: “le Roi Soleil”) made Versailles the heart and the icon of his powerful reign, everything was about appearances. The royal boats on the canal (“Grand Canal”), the eleven fountains of the gardens, the fireworks to celebrate one of the courtesan’s birthday, the gold and purple furniture of the castle. All his portraits were painted to show the king’s strengh, beauty and health. Even those painted in his late life, while he was teethless, smelling and with gangrene speading he was depicted as he wanted the people to remember him.

He was the one who installed “l’étiquette”, a very strict code of conduct and timetable to follow throughout the day. Louis XIV was conviced that it showed his power over people and everything around him. So pompous was he that there were three clear steps to getting up, between 8 and 8.30 A.M, in which courtesans ( simultanously appearing according to rank and affinities) would admire the king getting dressed and prepared for the day.

After “Le Roi Soleil”, Louis XV and then Marie Antoinette questioned the protocole at Versailles, too pompous and ridiculous to their taste. The first wouldn’t sleep in a bedroom full of people and the latter wouldn’t choose her friends according to their social rank. The story goes on and on through the years with always the same pattern: an inability to understand what Versailles was about.

Marie-Antoinette and her two children

Back to 2014, once I had seen the “Galerie des glaces” for the fourth time, I took time to observe the other visitors.

And I saw it. I found  that lack of understanding again. Some groups were rushing from room to room, spending a little more time in the well-known Galerie des glaces. Many others would look up, find something nice to take a picture of and go on. Others would sit on every bench available.

And all of them seemed a bit lost, like I was the first time I visited the castle, not knowing what really Versailles is about but visiting it anyway because the guide says so. Why are some people –like me– interested in visiting places they don’t understand? Is there a value in saying that we’ve seen it?

It reminds me at times when people ask us about our travels, and always go for the most famous sites. “Oh, Paris, la Tour Eiffel!” “Oh, Beijin, the Forbidden City!” “Yes, New York, have you seen the Empire State Building?” I feel a little strange saying that I haven’t seen all the usual places in famous cities, but I really don’t want to. I didn’t want to go and see the Empire State Building because I have no idea why it’s famous, so the way I see it it’s just a tall building. I don’t talk about Piccadilly Circus in London because I jut see a big screen and a crossroad; same with the Obelisco in Buenos Aires and so on.

How many times have I been to a place because the paperguide ranked it four stars just because the flow of people would create a “vibrant atmosphere”? But visitors keep on going to these places and I know that many of them know why they’re going there but I also know that many of them don’t know why they have to admire the view, but they do it for the sake of a picture.

And I feel like Versailless is that kind of place. The place where if you have no personal business to it, there’s not much interest in seeing it. And to add to it, there are no signs explaining anything about the period and usefulness of the rooms.

For someone who isn’t familiar with French monarchy, I think Versailles is the most complex site to visit. It was used way before Louis XIV and long after the end of monarchy (1789). It was  demolished and re-built countless times, re-decorated according to each king and queen, their guests’ taste or even the seasons.

Which brings me back to the title of this post, “C’est Versailles, Madame”.

Some places are like that. For some people you have, you must, visit them no matter what you really think. You go to Versailles because it’s Versailles. (although I think there are much better castles in France than Versailles if you are not specifically interested in the history that went with it)

For those who are wondering the question when visiting Versailles is: what exactly are you looking at?

The castle is now without contest a tasteful blend of the monarchies that lived there from Napoleon onwards. Each room belongs to a different period of time and a different style, but they all follow each other in a harmonious style with an emphasis on Louis XIV and Marie-Antoinette. The site was carefully studied to please the eye of the most difficult visitor and his expectations. A real effort was made in bringing back the furniture that was stolen when the castle was taken over by the people, something that other castles like Chambord are missing.

But above all, you will be looking at what the highest ranked people made of France, you will be looking at the place where wars were won, where music used to evolve, where the Tennis Court Oath was taken. A place that throughout the years was not only the representation of monarchy, but the symbol of what France was in Europe.

Visitor friends, here’s my piece of advise (not that you’ve asked for it but…)

1) Take the audioguide at the entrance (for free, count a 2-hour visit) or if you’re in a rush, rush away in the castle and spend some more time in both Trianon, le Hameau and the castle’s gardens.

2) If you’re into history, find an period of time, a king or a style of architecture that you like, look it up (or hire a guide) and only focus on it.

I usually am not a fan of history and monarchy but Versailles happens to be a very special place in the sense that you can visit it in a countless different ways.