Canada for $30 a day
The importance of being back 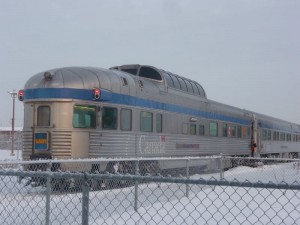 Trains, buses, hitch-hiking… the road is the royal way for backpackers to see the country. We feel adventurous, brave and the power of freedom overwhelms us. Nothing can stop us and one way or another, we’re getting wherever we want to be. Taking the train implies, in our adventurous minds, meeting people, extending the journey or enjoying the country side. On the train we relax but our journey keeps going, we’re active-passive. We can make it unforgettable or we can turn it into a big pause in our travel where we can sleep, daydream, draw or write.

In my mind, taking the train was a big adventure. A nice and comfortable way to see the country and take a peek in some remote places. A friendly way to travel, especially when you spend two days-or more- in the train with the same persons. Ideal.

But – it had to come!- in reality, taking the train was more a pain than a nice, relaxing break. These are facts –good and bad- that not everyone tells you when you take the Trans-Canada train:

1. Economy class. If you budget your trip like we do, you will travel in the economy class. Canadians usually wait and look out for discount prices but the only discount you get concerns the sleeping cars; and they will still be more expensive than the economy class. So, how is it like? First of all, it’s much more comfortable than a bus ride. The seats are bigger and you can almost lie down. The washrooms are never far and are usually quite clean; there are water fountains in every car. Be aware of this: there are NO SHOWERS available, whether you’re on for a day or five (that’s how long it takes to cross the country). Also, don’t forget your sleeping mask and if you’re a light sleeper, . The lights are reduced between stops but the train stops in very small villages, so there’s a lot of passengers getting on and off the train.

2. Food. Better take your food if you’re tight on your budget, especially if you’re spending more than a day on the train. There’s a microwave you can use so if you feel like cooking pasta or rice or anything else beforehand, you can heat it up on the train. Otherwise, sandwiches cost around $5 or $7 and dishes in the dining car cost around $13. They’re not unreasonably expensive but you get a better deal bringing your own food.

3. Location. This was the biggest problem. Sometimes the train station is right into the city, sometimes it’s not. And we fools, didn’t think of that. Nor did we think that if the station was away from the downtown it necessarily meant that there would be no buses to get to the city. Convenient. You won’t have any troubles if you’re getting on or off in Toronto, Winnipeg, Jasper or Vancouver but you will if you’re heading to Edmonton or Kamloops. We paid a $20 fare for the taxi to drive us from the station to Edmonton, but no money could help us in Kamloops North at 2AM. Why? Read number 4

4. Time. That’s a huge point to consider. Trains are always late. Always. If you’re on it, you’ll find that it stops in the middle of nowhere for long minutes –sometimes five, sometimes fifteen-. But hey, don’t we say that the journey is as important as the destination? The annoying part is when you’re in the station, waiting for your train. Because you feel like you’re wasting your time when you could be hiking or visiting the place, instead of sitting at the station. In Jasper for instance, we were supposed to take the train at 2PM but we boarded at 6. I’m a patient person and I don’t mind waiting, not only because it’s part of the adventure but also because I need time to assimilate and reflect on what I’m doing. But boarding four hours late was too much, especially because I loved Jasper so much and I couldn’t get enough of it. But what really was a problem was that we still had a seven hour ride to get to Kamloops, that is, we were supposed to arrive at 1AM and pay a hostel for half the night. One, we arrived at Kamloops at 2AM –don’t ask why, we’ll never know- and, oh surprise! The train station was 10km away from any civilisation. So yes, no buses and no cabs, we walked 10km at 2AM on the side of the highway. It normally would be okay for us to walk that much, but not that late and not with the backpacks, and not on the side of a highway. We went straight to the first motel we saw and it was 4AM. We had to pay – a reduced fare, but still- $60 for a three-hour sleep (check out was at 11, but breakfast until nine so….) Of course, no couchsurfing was possible at that hour so we just had to deal with that. And it’s fine, because without these obstacles, travelling would be boring, it wouldn’t even be travelling; but be aware of what you might encounter, it’s always better to be prepared.

5. The panoramic car. It’s the main- and only- attraction and it’s worth it. You get to admire the wonderful landscapes of Canada from the top of the car; landscapes that you wouldn’t see it you took the highway.  It reminds you of the immensity of the country and how preserved its natural side is (some would say “undeveloped”). The railway is the same it was when it was built and so is the train route. If you’re not a patient, or a nature-lover person you’ll quickly get tired of the hundreds of miles of pines and lakes or the Prairies or the mountains. Don’t forget how big this country is!

6. You can stop wherever you like. Sometimes the train is the only means of transport that goes through the village so it’s very common for the locals to ask for the train to stop even if there’s no station. We didn’t have time to do it (and the weather wasn’t at its most), but I think it could be fantastic if you’re willing to do long hiking trails, or really be at the heart of Canadian culture. If you’re interested in this, make sure you give the exact mileage in advance so the train stops, and I advise you plan your trip. Don’t go there without knowing what you do, because you will not find any hostels and perhaps not even restaurants. Couchsurfing could be a solution.

I don’t regret taking the train because we saw things we wouldn’t have seen if we had hitch-hiked or taken the bus. However, because it was so often late, we missed the most beautiful parts of the trip (the Rockies, Vancouver) because it was dark. Make sure you book your trip in the mornings so even if the train is late you get to see something. Except for the plane, Canadian transports are very poor. They’re often expensive and not very convenient but unless you have a car or you hitch-hike, they’re your only choice.

We paid $920 for both of us from Toronto and we stopped at: Winnipeg, Edmonton, Jasper and Kamloops. I think the fare is the same whether you stop or not, but when you plan your trip, bare in mind that in winter there’s a train every two or three days.

All opinions are ours. We didn’t ask or receive any discounts or free tickets in exchange for this article.