“I’ll never go there”: the dangers of travelling
Vlkolínec: a stop in time 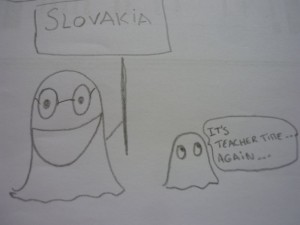 Only a few people I’ve met know about Slovakia, or have heard of it. Slovaks go mental when they hear for the hundreth time “ah yeah, czechoslovaquia” or “Russia” or” Slovenia” being associated to their country.

Guilty nº1: me. I didn’t know anything about Slovakia before coming here, I didn’t know the capital city was Bratislava and that it was an hour away from Vienna.

Many start saying how they really really, really want to go to Eastern Europe. But that’s just wrong. Some people in my family think that I live in Czechoslovaquia (but then they thought I was in Ireland when in fact I was in Cardiff so I can’t say geography is a strength in the family) or Hungary (that would be Budapest), or even Belgrad (go figure). Anyway, let’s give some credit to this beautiful country, its people (and let’s improve our general knowledge).

*drum roll*  Here we go, for fun facts about Slovakia!

Let’s get our vocabulary right.

“The only thing I know about Slovakia is what I learned first-hand from your foreign minister, who came to Texas.” This is a quote from US president. He had actually met the leader from Slovenia, not Slovakia.

Staff of Slovak and Slovenian embassies meet once a month with their colleagues to exchange wrongly-addressed mail!

That’s more than 300 for a country that’s roughly 500 km long… And a lot of them are UNESCO sites!

Like this ice cave that we visited in the Slovak Paradise, and that was formed in the Ice Age.

It’s central Europe people! Together with the Czech Republic, Poland and Hungary, Slovakia is part of the Central Europe region. Please don’t go around and say you were in Eastern Europe, because… well, you weren’t.

There are no words to describe this

I know you French lot have. I know for fact that in school you have to learn about how Napoleon signed the Presburg treaty (meaning peace with Austria) after Austerlitz.

But the Czechs, Hungarian and Croatian don’t.