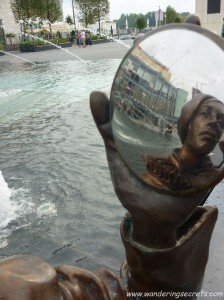 On my very first day in Bratislava I noticed two things: the blue sky and this gentleman keeping me company in the main square.

A week later, while wandering around the old town I saw my gentleman’s friend: the man at work. After a night of drinking Slovak beer, I came acroos another static man in town.

In two weeks, I came across statues of all kind and size, standing everywhere in Bratislava.

But none of them seemed to share a common point. There are statues of imaginary characters, men, women, artists and animals. All made in bronze, spread over the city, hidden in shops and around corners. Some are here to pay a tribute to deaths, to a historical evet or simply to amuse the tourist.

Evidently, the man at work and my gentleman from the main square are the stars of the show. Were they put there simply to show visitors something different from Vienna and Prague? Visitors who don’t see the Slovak city’s charm when it’s the last stop of a week-long cruise of all capital cities of central Europe. Or visitors who come here out of curiosity, people who expect something different but who find themselves looking at Austrian-style buildings, a Hungarian church and a fake castle.

I somehow find these statues poetic, mysterious. I’ve thought a lot about their meaning, the reason for them to be standing here, trying to prove a point no one can see.

The more I discover Bratislava, the more hidden statues I find. The more I see them, the more I wonder.

Slowly, I’m starting to understand this ancient country. From comments of my students, my colleagues and from what I see, Slovakia is a mix. A mix of architecture, of languages, of traditions. Slovakia is a tasteful blend of Hungary, Austria, Poland, Russia,the Czec Republic and all their minorities. They have fought for their identity since the very beginning: Romans, Mongols and others.

So maybe it is normal that Bratislava’s monuments look a bit like those in Vienna, Prague or Budapest.
But in the end, Slovakia is a country that has survived invasions and that has learnt from them.

The man at work

Treasure of a small bookshop

One thought on “Hide-and-seek: Secrets of Bratislava”