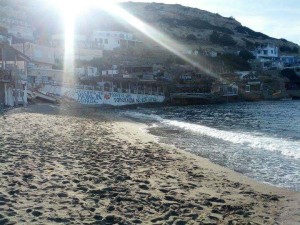 We’d heard of that village before: Matala. Sounded a bit African; but definitely not Greek.

The nice prose of the guidebook made us dream of how they followed the steps of Cat Stevens or Bob Dylan, how getting to the caves reminded you of the 60s, how the hippies fought for their beliefs and carved the stone into caves.

A group of Frenchmen were discussing Matala over lunch, some arguing it was a nice place, some others trying to convince the table that those hippies were in fact super rich people driving porshes and living in houses.

Everyone had a bit of good and bad to say about Matala, so we knew we had to go.

Getting there was an adventure in itself. A two hour bus drive (to join villages that were 10km apart, that is), a stop in the middle of nowhere to see the beautiful ruins of Feistos, a bus that never came back. A German family that pitied us for having spent two hours waiting for the bus took us to the promise land: and finally, Matala.

It was the middle of the afternoon so most people were either on the beach or already gone. A blessing.
I could feel the excitement growing in us, we had been waiting to see the village for so long. We sat down in a cafe, had a nice chat with the owner, ate well, listened to the Beatles. The sun was still up and we wandered around the village.

We got to the famous caves, decided not to pay the entrance fee and kept on wandering around.
Matala had nothing special in itself, a few paintings here and there on the roads, handmade jewelry and John Lennon playing in the background.
The sea, the beach and the caves were beatiful…

But there was something special in the atmosphere, a joy that would come as people entered the village and gradually faded away when they left it. Everyone was happy, people were relaxed, enjoying the moment.
That was, for me, the only reason to go to Matala. Maybe it’s because of all the fuss around the history, maybe the whole “we are hippies” gets too commercial in the summer.
Maybe the jewelery isn’t handmade and maybe you will hate it, as those Frenchmen did.

But on that afternoon of October, as we left the village we felt a sweet sensation, a small joy that made us giggle all the way back to our rooms. The sunset coloured the mountains and a golden light illuminated the sea and the caves. On that day, Matala was perfect.

2 thoughts on “Matala and the hippie road to happiness”