What’s your story? Policemen are humans
Fujara, the Slovak flute 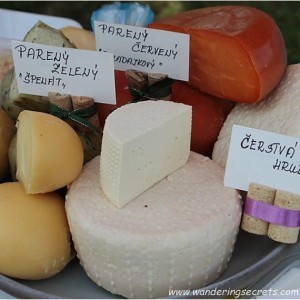 As I apparently often do in this blog, this post comes as a reaction to guidebooks and the visitors’ tendency to underestimate Slovakia. It’s terrifying how little the books actually say (or know?) about this country.

Granted, I don’t know a lot more than the guidebooks. Just a little bit, learnt during my year around here. On certain areas. Or most of them. But less than the Slovaks.

The truth is that this is not only a question of protesting like the French do (or is it?). My French half can’t help looking for food. I will aways find good food. Anywhere.

The French cannot resist a slice of cheese. Everyone knows that.

I’ve counted nine types of Slovak cheese so far, and that’s eight more than many references. Anyone interested in Slovakia has heard about “Bryndza”, the famous sheep cheese that we use to eat the equally famous “bryndzove halusky”, but very few visitors know about the other types. And you don’t know what you’re missing.

It’s all about telling you that there’s something else than Brynza in Slovakia, so I’m going to spare you the whole list of cheeses and put in some of them only. Enjoy!

Yes, Frenchmen. You’ve read right. Slovaks have and produce Camembert. I reckon people from other countries will be pleased to know that you won’t have the impression you are eating dirty socks when you taste it. Plesvinec is nothing like the French one. It’s not smelly, has a much softer flavour and is not runny. The crust can come with herbs or pepper and Slovaks eat it as a snak, with bread or something to die for: marinated in oils. Yummy!

This semi-hard sheep cheese (as most Slovak cheeses are) comes in long and thin strings, often braided. In the supermarket you can find the plain version or the smoked one. After a weekend in Orava, where this kind of cheese is made, I can tell you that there are no words to describre and compare a commercial cheese and the one you can buy direcly from the farm.

I tried to cook the cheese but it seems that Slovaks eat it as it is, as a snack or snippers.

Originates from the Tatras (meaning that its origins are shared with Poland) and dates back to somedate around the 17th century. The texture is like Edam and it is said to be “naturally smoked”. I don’t know what it means but I can tell you it’s really worth it!

Parenica is a a semi-firm, steamed (apparently unripened aswel) and usually smoked cheese. Parenica’s texture is creamy and soft and the steaming gives it its golden colour. The cheese is produced in large strips woven into spirals.

The name comes from the Slovak word for steaming.

I came across this producer last week at the market and haven’t found any information about this type of cheese on the web. It’s very different from the traditional Slovak cheeses, the texture resembles that of Edam or the French Mimolette (semi-hard) and has an incredible smoked nutty flavour. Definitely something to try!

And many others… Until next time my friends!