Coping with staying home: tips for travelers
8 mistakes I did when I had post-trip depression 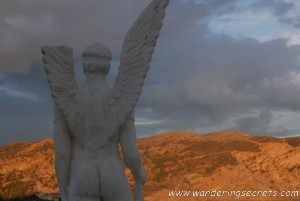 “You see, in the end he burnt his wings and died” he said.

My eyes were mesmerized by the sun, setting on the mountain, colouring the landscape in gold, as I was standing behind Icarus. We seemed to be watching the same thing, him an I: the skyline over the mountains; the sunshine; the sea.

“You see, in the end he burnt his wings and died” he said, “If you keep doing this you will burn yours too“.

For those who are not familiar with Icarus, he was the son of Daedelus, the man who made two pairs of wings out of wax and feathers in order to flee Crete. On the day they flew, Icarus was overwhelmed with the feelings of freedom and power, pushed the wings and his luck too far, got too close to the sun, melted his wings and drowned in the sea.

So yes, he burnt his wings.

But his story is like the eternal half full/ half empty glass. Mine is always half full, so when I read Icarus story I don’t see the end as a means to prevent him from flying. Their flight didn’t last long but during those minutes, Icarus was driven mad by how free he felt at that moment. He didn’t listen to his father’s advice and to me, he didn’t care.

The way I see it, Icarus saw this as his only chance ever to fly, to run away, to experience something no one else ever did. And all those feelings were good, they were positive. He was ready to give up logical thinking and the possibility of surviving to experience those feelings. He was ready to give up on a future life, or at least he didn’t think about it at that precise moment. Who wouldn’t feel overwhelmed by this?

His father, I guess.

But did he enjoy flying? Did he taste freedom while he was flying, or was he too busy watching his son and thinking ahead?

I see Icarus as an icon in the travelers world. We all are a bit like that, driven by the feelings we experience in the present rather than by what lies ahead. It doesn’t mean that we are dumb, or not able to take responsibilities, or unconscious of the situation we are in. It just mean that we’d rather live the moment.

Traveling is in a way like this legend. You can see it with an optimistic or a pessimistic eye, both point of views being valid but having a very different influence on the story. The essence of traveling would be that poweful moment when Icarus felt the wind on his face, when him and his father felt the excitement of leaving the island where they were being held prisoners. To me, the essence of traveling is, like in the legend, pushing your limits, discovering where they are and feeling comfortable about it. Discovering something new, and always want more of it. Rising up and looking at things from a different angle. Icarus wasn’t affraid at all. His father was, for him and for his own life.

Choose to live your life the way you want, the way it makes you happier. Some want to live their life full on, some don’t back up when risks are higher (or simply different) than usual. Some others would rather live a long healthy, comforting (in its own way) life. In any case, the end is the same: one way or the other, we’ll burn our wings.

It’s all about figuring out how you choose to consume them.

When I came down to earth and saw the wonders of Agia Galini before my eyes, I just watched and thanked everything for being how it was at that moment: precious, ephemerical and beautiful.

Lifting upwards on his wings, flew ahead, like a bird, leading her fledglings out of a nest above, into the empty air. (…)The boy began to delight in his daring flight, and abandoning his guide, drawn by desire for the heavens, soared higher. His nearness to the devouring sun softened the fragrant wax that held the wings: and the wax melted(…)

What about you? How do you see the story?

Next for our fellow travelers: Changing critera, a guide for working travelers

Categories: Behind the scenes, Crete