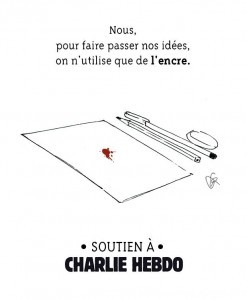 Jihadists have taken the lives of the entire redaction of the French magazine “Charlie Hebdo”. The deadliest attack in France since 1961.

So many countries have suffered of terrorist attacks. So many people keep dying of it, so many families have been deprived of a parent because someone decided that person wasn’t worthy of living.

And yet, we praise everyday that the Human being is the most intelligent, that we have an answer for everything, that we have survived millenaries, that we are powerful for having taken over nature.

We look into the dictionnary and this is what we find:

I have worked as a language teacher in various countries of the world. In all of them, I had to work my way in some people’s head to fight racism, both in my classroom and out in the street, to fight against animosity (of which we should reconsider the meaning), to fight stupidity. I have worked so much with my students to understand and value respect. Most of the times it’s worked.

But I also know that there is something deep down all of us, that we have tried to cover with words like “animosity” , “bestial” or “beastly”. We are animals. And animals in their primitive nature kill each other. They always have, they always will. Our world is a jungle and we are our own predators. That’s how nature played us.

Here I am, today, not knowing what to say, not knowing how to reply to the biting remarks of my student who disagreed with the whole idea of a melting-pot country because I also believe- no, I don’t believe, I know– that human beings can be brutal beyond imagination.

But on Wednesday 7th of January 2015, 14 people died doing their job. Their job to stand up, to shout out what their people think but don’t say, their job to be there, to be human, to defend what they believed in: freedom.

Through ages, eras. men have searched Freedom. That seems to be another aspect of us Humans. Some of us think we’ve found it, some of us know we haven’t.

For other countries, this attack might be like just another one. Like the ETA one in Spain, like the Twin Towers in the USA, to mention the most spoken of. An attack in France…

In a country where “comfort” is the key word, this attack takes France back to the days where people knew what it was to be French. The days when people knew their anthem, where citizens didn’t hate each other (that much).  Slowly, I trust France to get out of that fogg of comfort and fear and to become what it was: a country of high minds, where artists were not afraid of speaking out. The country where other artists came to seek peace and elevation.

An old country that has, like all Old countries, seen more wars than are reported.

You have wrongs, France. Many of them. Countless wrongs. You have problems with other nationalities, France. You have always selected who you wanted in your land, you have disregarded many people, many kingdoms, many rights. You haven’t kept your tongue when you should have. Your people are bitter, France. Your image is tarnished, France.

But you never ceased to believe in the importance of Freedom. Your people will rise and fight back like they always have. You’ve never forgotten the reason that makes people shout in your streets. You have never truly died.

Draw your path, mark your existence. And the world will be a colorful place until you die.